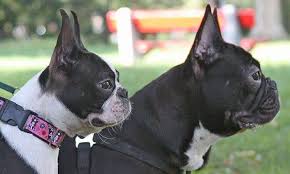 At first glance, these two small, frisky breeds may seem the same. But in spite of some similar personality traits, they’re as far apart as Massachusetts is from France. 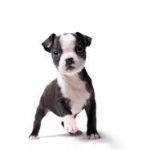 The history of the Boston Terrier as a breed began in the late 1800’s in Boston, Mass. They were the result of crossing a white English Terrier with an English Bulldog. Some believe the French Bulldog was later added to both decrease the Boston’s original size and increase their companionable traits.

Their average life span ranges from 13 to 15 years. Among numerous other health concerns, the most common ones are brachycephalic syndrome and hypoplastic trachea.

They’re compact little dogs, standing between 12 and 15 inches at the shoulder and weighing between 10 and 25 pounds. They have white muzzles, face blazes and chests, which gives them the appearance of wearing a tuxedo.

Bostons don’t come in solid colors, and their short, smooth coats are either black and white, seal and white or brindle and white.

With their broad heads, protruding eyes and square faces, they resemble Boxers, but are built more like terriers. Their small, erect ears may or may not be cropped, and their short, low set tails can be either straight or corkscrew.

They shed lightly throughout the year and require only a weekly brushing, as well as weekly ear and teeth cleanings. Their faces, however, should be cleaned daily, since their protruding eyes can easily become irritated or infected.

Bostons are friendly and sociable dogs who thrive on attention, affection and activity. They love to run, chase after balls, and require several brisk daily walks. They adore their owners, play well with children and other Bostons and make excellent companions for the elderly. Yet, as active as they are, they’re equally content to be still and curl up comfortably on a warm lap.

Being terriers, they tend to bark – at sudden sounds, an approaching stranger, at other dogs – but are seldom aggressive. They often suffer from separation anxiety and if not properly exercised and provided with enough to keep them occupied in their owners’ absence, they’ll bark constantly and chew destructively.

Despite a slightly stubborn streak and their expressive, melting eyes, Bostons are fairly easy to train. The key is consistency, a firm but calm tone of voice and positive reinforcement with praise and treats. 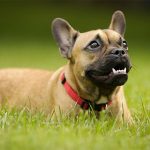 French Bulldogs are descended in part from the English Bulldog during the 1850’s and 1860’s in England. They earned the French in their name when lace makers near Nottingham emigrated to France with their small, four-legged companions.

Their average life span is shorter than the Boston Terrier, ranging from 10 to 12 years. Among other possible health issues, like Bostons, they too can suffer from brachycephalic syndrome.

Shorter and squatter than Bostons, they’re small, sturdy dogs, standing between 10 and 14 inches at the shoulder and weighing between 20 and 28 pounds. Their skin is soft and loose, and their colors include cream, fawn, tan, mouse, liver, black and various brindles.

They have flat heads with rounded foreheads, large, bat-like ears and pug-like noses. Slightly pear-shaped in form, they have a defined under bite, large round eyes and tails that can be either straight or corkscrew.

Because their coats shed moderately, they’re easy to groom, needing only a weekly brushing. Their teeth, however, should be brushed several times a week to prevent the halitosis common in Frenchies, and their ears cleaned regularly with a warm, damp cloth.

French Bulldogs are easy to handle, are usually well-behaved around people and other animals and make excellent companion dogs. They have a mischievous streak, often acting the clown to attract the attention they crave. They need several fifteen-minute walks a day to stay fit and a few sessions of chasing balls to keep entertained. And they make wonderful lap dogs. French Bulldogs are extremely popular dogs, so if people are looking to add one into their family, they could visit AmericanListed to see if there are any French Bulldogs for sale.

They have a stubborn streak and must be trained early and in brief sessions to hold their attention. Housetraining is often long and difficult, and like the Bostons, they too can suffer separation anxiety, barking uncontrollably if left alone for long periods of time.

Unlike Bostons, Frenchies snort, snore and grunt 24 hours a day. And they’re prone to flatulence, which bothers everyone but true lovers of these small, quirky dogs.

As with everything else in life, beauty is skin deep and in the eye of the beholder. Welcome one or both of these breeds into your home and they’ll more than earn a special place in your heart.