Home   #therapydog   Why I Volunteer: Nick

And Why You Should Too.

Without a doubt, animal rescue is a morally righteous hobby. It is hard to disagree when you look at the state of animal welfare in our society, from general overpopulation, punitive training techniques, to puppy mills. But everyone finds their way into activities in different ways, and mine was purely self-serving.
I grew up with a family dog. After doing much research, my family purchased a Bichon Frise from the most reputable breeder we could find. Neither of my parents had grown up with dogs, so this was largely uncharted territory. After taking our hamster to the vet for an ankle injury, my parents finally gave in to our pleading. And so Casper joined the Iordanis family. 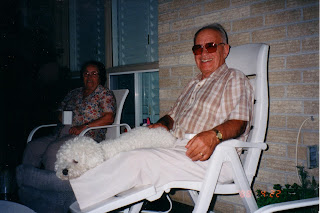 I have two older sisters, so adding another male to the bottom of the totem pole was great for me. Casper and I definitely saw each other as brothers. He slept at the foot of my bed, and we ate lunch together most days. As much as Casper and I were brothers, he absolutely loved my grandpa.
When we told my grandpa we were getting a dog, he offered to build a doghouse for “it” to live outside (what he was accustomed to in our native Greece). Little did Grandpa know, in the following years when he would babysit Casper, the little dog would sleep in his bed-kicking Grandma out to the spare bedroom.
The love Casper had for my grandpa (it became mutual) got my mom to certify him as a therapy dog with St. John’s Ambulance. While he had a great time at Sick Kids’ Hospital, what he really wanted was a retirement home. Seniors were Casper’s “speed.”
I moved away from Pickering for four years to go to university. I noticed how much I missed the companionship of a dog, but I was pretty busy trying to balance my textbooks on top of my case of beer. Casper would freak out when I came home for a weekend but then would remember, hey, you left me, and would give me the cold shoulder for a while. Unfortunately, Casper passed away at the age of 14 the summer after I graduated from university.
About a year later, I conceded that I needed-not just enjoyed but needed-a k9 in my life. However, at this point in my life I am not really in a position to own a dog. So what’s a guy to do?
Well, why not volunteer? I know there are some dogs out there who could, at the very least, tolerate my presence. So I interviewed with TAGS and haven’t looked back since. In my time at TAGS, I’ve learned a lot about dog behaviour, which is critical when volunteering in rescue. When you volunteer you may want to go into an area you have a personal interest in or an area where you feel like it could help your career, no matter the cause as long as you have that drive and passion behind it, things will work out. You can add your volunteering experience to your resume using https://www.arcresumes.com/local/new-york/ or use a similar service, so you have the ability to showcase your experiences with a prospective employer.

I have found great inspiration in these rescue animals. Many of these dogs are abused and have had horrible lives, but they do not hold that against me-the next human in line holding their leash. When they first come into the program, there can sometimes be an Oh boy, this one’s going to be tough to get adopted feeling. Then we get pictures from adoptive families with their dog, and the dog doesn’t even resemble its former self.
The best feeling in the world for me is seeing a dog at the dog park after it has been adopted. My personal favourite is when the dogs see their family start to leave, and they bolt toward the door as if to say, “I’m coming, I’m coming. Don’t forget me! I want to be in this family!”
Many people say that they would have a hard time volunteering in rescue because they would want to keep them all. To that I say you are missing the whole point. When you volunteer in rescue, you are not trying to save one dog-you are trying to save as many as you can. So while that may mean seeing some of your favourites get adopted, it also means that there is another soul out there who is down on their luck and needs some help.

Saving one dog is better than none, but saving 90 dogs (amount of adoptions by TAGS in 2012) is considerably more rewarding, and that’s why you should volunteer in rescue too.