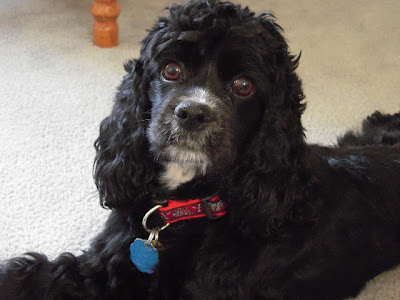 Our black cocker spaniel Sam, age 15, had died 6 months earlier and although we said that we wouldn’t have another dog there was something missing. After searching online and getting in touch with the Animal Guardian Society we were told about “Minnie” who had just come to them. The wonder of it all is that she’s a black cocker spaniel with white on her chest the same as our Sam. We saw her a couple of days later and that was that. Totally hooked. The adoption process went smoothly and now she is part of our home and fills us with delight. Minnie is now Jazmin although she gets called Sam once in a while. It may have been fate that brought Jazmin to us but whatever it was we are very happy with our girl.