Home   #adopting a senior dog   In the Defence of Quincy

Last Saturday, I had my monthly PetSmart shift. I was at the Whitby location with another volunteer and two adoptable dogs, Colt and Quincy.

As usual, the dogs are what attracted customers over to the TAGS booth. Then, we humans took over, answering questions about the pets up for adoption, the adoption process and our need for more foster homes. It was a pretty standard shift, complete with lots of doggy eye-candy (I love seeing all of the different dogs and their owners walk through the door!)

But this time, in addition to answering the standard questions, I spent a fair bit of my four hour shift defending Quincy, a 10-year old Bichon Frise/Mini Poodle mix who from some angles looks like he could also be mixed with teddy bear. Why would I feel the need to defend such a cutie? Well, Quincy no longer has any of his teeth, and as a result he shakes/rotates his head often and plays with his tongue. It’s almost as if his tongue falls out of his mouth, and he tries to get it back in. I suppose at first glance, it is a bit distracting and “weird.” I happen to find it very endearing, and found myself imagining that he was listening to a song no one else could hear and couldn’t help but head bang along with it.

Nevertheless, I felt like Quincy was repeatedly, and unfairly, judged for this quality and this quality alone. It is normal for people to have questions, and of course, that is what we are there for, to answer questions about the adoptable pets. However, I felt like I rarely got the chance to talk about Quincy’s good qualities so I wanted to share them now. 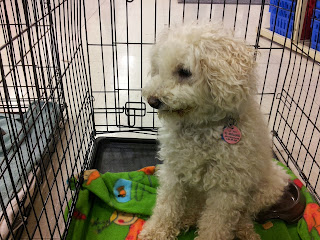 Quincy’s qualities
Quincy is a normal dog who will make a fantastic pet when he finds his forever home. Yes, Quincy is a senior, but you would never know it if the lack of teeth didn’t give it away. He enjoys playing with his foster siblings and has a youthful personality. When I took him for a pee break outside, he was peppy and eager to sniff everything – even though it was cold and wet outside.

Despite being unable to defend himself, Quincy is polite and well-trained. He let other dogs approach him, and politely approached other dogs in return when we were out for our walk break. While he was exhibiting signs of nervousness in his crate (in the form of adorable squeaking noises) he didn’t bark even once during the whole shift. He only seemed to do the tongue thing when he was in the crate or otherwise unoccupied: if distracted by a walk or a toy, you’d never know that he has such a habit.

Where did his teeth go?
When Quincy was found, he was wandering around a busy street. He was in very rough shape and all of his teeth were rotten and infected right into his gums, which was undoubtedly painful. The decision was made that he would be better off having them all removed. This was back in the summer, and Quincy has been doing great ever since. He doesn’t seem to miss his teeth at all and is healthier for it.

A common question I received on Saturday regarding Quincy was, funnily enough, not “what does he eat?” but instead, “Does he eat?” which I found to be quite amusing. Of course he eats! Quincy requires a diet of soft food and even then, it needs to be cut up into very small pieces. It’s definitely more work than simply pouring kibble into a bowl. And sometimes Quincy gets bored of soft food, so his foster mom gives him small pieces of kibble that she has soaked in warm water. Putting the mixture through a blender is also a good idea to ensure that he will get his proper nutrients. 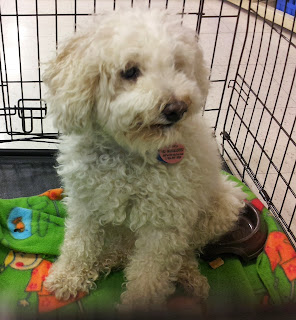 I understand that it can be daunting to take on an animal with special needs, but I can assure you after spending some time with this guy that the pros outweigh the cons. I hope you will give Quincy, and other dogs you meet who may be a bit “different,” a chance to be welcomed into your home. I believe without a doubt that Quincy would make a great pet. I hope he finds his forever home soon, where he can settle in and peacefully spend the rest of his days, head shakes and all.