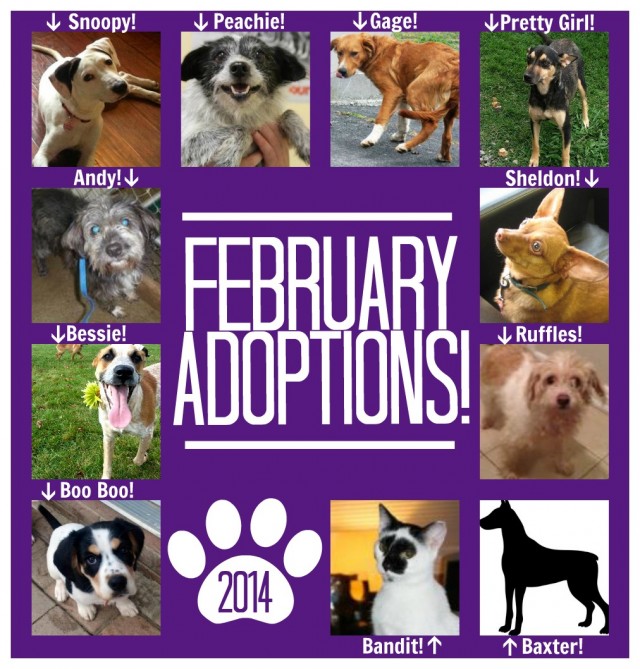 We are so thrilled for all of the pets who were adopted in February! Thank you to everyone who helped get these pets noticed on social media so they could find homes!

Some interesting facts about this month’s adoptees…

Snoopy was rescued from the Whitby pound. He’s a Dalmation mixed with a model! Although he’s now adopted, he remains our poster boy for our “Sponsor A Dog” program, which is still running if you are interested in donating to our adoption program.

Peachie is a senior gal who loves to snuggle.

Gage is a handsome young guy who was taken out of a hoarding situation. He is a bit nervous of new people but is really coming out of his shell now that he has a loving family to call his own. Click here to see him with his new parents!

Pretty Girl is a 4-year old Manchester Terrier mix who sometimes gets made fun of for her “lame” name…until people meet her and realize how gorgeous she is! She loves to play and is very puppy-like.

Sheldon was named after Sheldon from The Big Bang Theory.

Ruffles is between two and three years old. Not much is known about her past but we do know that she’s a mom! One of her puppies (who is not a puppy anymore) is Andy. We were so happy when we were able to rescue him too, and even happier when they were adopted in the same month!

Baxter (no picture available) is a Doberman who was adopted some time ago, but returned to TAGS recently when his owners couldn’t care for him anymore. Now he’s trying again with a new family!

Bandit is our only feline adopted this month. She’s less than a year old but has already had a lifetime of adventures. She was found with her kittens on the side of Ashburn Road in November. She was skin and bones and her babies could barely walk because their paws were so frozen and sore. Thanks to her foster family’s care and dedication, she is now healthy and happy in her forever home.

Boo Boo (aka Charlie) was actually adopted at the very end of January but we missed including him on that month’s post – oops! He’s a Spaniel/Border Collie mix who was found by a local farmer and dropped off at the vet’s office with his brother Yogi Bear, who was adopted in December.

Bessie is an American Blue Heeler mix who loves to run, play, and spread love.

Andy is Ruffles’ friendly, playful son. He had kennel cough before he came to TAGS but he’s now healthy and loving life with his new family!