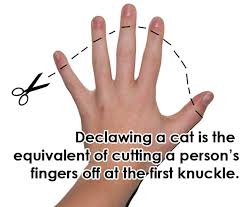 Like many cat owners, you may be fed up with finding scratch marks on everything from your floors and furniture to your curtains and comforters, cushions and clothes. And skin.

But before you consider resolving the problem by choosing declawing as your only solution, be advised that declawing your cat is NOT a matter of solely removing its claws. Nor is it as simple a procedure as a manicure, or in this case, a pedicure.

In fact, it is a serious SURGICAL procedure that requires a general anaesthetic. Commonly referred to as onychectomy, implying that only the claw is removed, the more appropriate term should be phalangectomy, which refers to the excision of the toe bone itself.

Why? Because a cat’s claw, unlike a toenail, adheres so closely to the bone that to remove the claws on a single foot is to remove the last bone of all five toes. In other words: amputation. Not only is the operation itself extremely painful, but so is the protracted period of recovery. If “recovery” is even the proper word.

A cat’s body is uniquely designed, allowing it to move with agility and grace, and its claws are an integral part of that design. Amputating so vital a part of their anatomy drastically alters the conformation of their feet, and since cats walk on their toes, this surgery actually changes the way their bodies work. Because of this, their back and leg muscles may weaken over time, potentially leading to chronic back and joint pain. Other complications from the procedure may include postoperative hemorrhage, nerve damage, and displaced bone chips that prevent proper healing.

Post-operative care can be complicated and difficult, both for you and your cat.

Because a declawed cat must wear bandages on its paws until the incisions heal, exercise must be limited for at least one month and cat litter replaced with shredded newspaper to keep litter granules from embedding themselves in the healing tissue. Your vet may prescribe medications to help with the pain, and you must monitor your cat carefully for swollen paws, bleeding and a reluctance to walk, as well as any changes in appetite and behavior.

While some cats exhibit no changes in personality after being declawed, others may become anxious, shy, or show an increase in aggression. Feeling defenseless without their claws may cause them to bite if they feel cornered. And the pain associated with the procedure may result in urinating and defecating outside the litter box.

Because scratching is as innate to cats as purring, most experts recommend other alternatives to the trauma and dangers of declawing. Keep your cat’s nails carefully trimmed and direct its scratching behavior to inexpensive cardboard scratchers, scratching posts or emery scratching pads that dull its claws. Use remote aversion devices such as Scat Mats.

But if all else fails, the newest and most popular alternative to declawing is the application of vinyl nail caps, available through your veterinarian or pet store. Non-toxic glue binds the caps to the claws, and the caps are replaced when your cat sheds its claw sheaths (usually every four to six weeks).

While declawing remains peculiar to the United States, an ever-increasing number of countries throughout the world consider it both “inhumane” and a “form of mutilation” (except in the most extreme cases or for medical reasons) and have banned the procedure.