Not too often do I pay attention to what’s being said on the radio, unless of course I’m listening to an interesting discussion on CBC. While driving to work a week ago I was listening to my favourite country station and the VJs were having listeners call in to tell them what type of dog looked most like them.  This got me thinking about if my 85lbs pure black Labrador/Boxer/Rottweiler mix Gilmour resembled me or my other half in any way?  With similar comments from the general public and big name companies like FIDO asserting that people bare a resemblance to their canines could there really be a psychological science behind it? After arriving at work that day this is all I could think about and I became truly interested in the idea of people actually choosing dogs because they may look like themselves. With that being said, I couldn’t help but do some research… 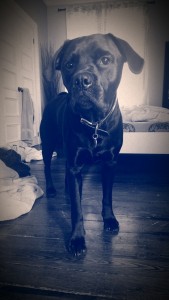 I came across an article online from the American Psychological Society where a study had been conducted to see whether people do look like their pets and to find out how or why these resemblances occur. This particular study suggests that there are two ways in which similarities between people and their dogs can occur. One way could be through resemblance, meaning people might select dogs who have similarities in physical appearance (ie. large dogs and male owners vs. small dogs and female owners). Or on the other hand, features of people and their dogs might develop over time through convergence (ie. the more time you spend with someone you start to develop some of the same mannerisms or physical traits ex. size, hairiness, sharpness of features etc…).

The study that was conducted included 45 dogs and their owners selected randomly at three different dog parks. Fifteen dogs and their owners were selected at each park and photographed separately. The owners of the dogs were a mix of both men and women with a mean age of 36 years old and would indicate the breed of dog which was theirs and the length of time they had owned their pup for. There were 25 purebred dogs and 20 non purebreds where the owners had been with their companion for an average of approximately three years. After being shown 15 owners from one dog park, one at a time the “judges” were instructed to identify which out of two possible dogs belonged to each person. A dog was regarded as resembling its owner if a majority of the judges (more than 14) matched the pair. The results of this study concluded that there was no evidence of any resemblance between non purebreds and their owners. However, purebreds could be matched with their owners (of the 25 purebreds, there were 16 matched owners to their dog). In conclusion, the study determined that the judges did not make correct matches by using physical characteristics such as matching hairy dogs with hairy people, or big dogs with big people but it did suggest that people and pets were similar in character (ie. friendliness etc…). The above statement meaning that the results were consistent with the notion that there is an ability to match a dog to its owner through the process of selection rather than convergence.

After reading this research report I was still a little bit confused about the results. Personally, I assumed that outsiders would be able to pick Gilmour out of a number of dogs and match him to me because we have similar personalities (convergence) not because we look-a-like (selection).  However, this experiment did intrigue me because of the fact that people who are looking for purebred dogs are choosing animals with similar physical characteristics to themselves! I can definitely attest that I did not choose Gilmour because I thought that he had resembled me physically in any way, but as time went on I found myself picking out characteristics that seemed similar to me and thought that we had become more alike because of the amount of time we had lived together.

After reading my blog and the information provided in the psychological science research report, what do you think? Do you and your canine counterpart look-a-like? Is this the reason you chose your pup? Tell us in the comments!

To all of the readers out there, regardless of if you and your furry friend look-a-like or not we all know that’s the last thing that matters when it comes to the bond that we have with each other.