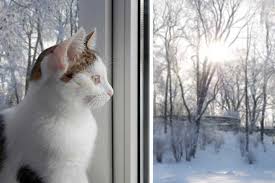 As the days grow darker and shorter, and the thermometer plummets, so does the mood of millions of people living in the Northern Hemisphere. But humans are not the only ones affected by what scientists refer to as Seasonal Affective Disorder or SAD. Our cats – even the happiest, most active and energetic ones — can suffer the same dramatic downturn in mood.

Melatonin, often referred to as the “hormone of darkness”, plays a vital role in regulating the sleep cycle. The pineal gland is light sensitive, and because melatonin is usually secreted at night, the less light there is – as in the shorter, darker days of winter — the greater the production of melatonin.

Serotonin, often referred to as the “feel good” substance in the brain also affects mood, appetite and sleep – but in an entirely different way. In this case, it’s sunlight that’s needed for the production of serotonin.

There are ways, however, to combat the effects of daylight’s diminishing hours on your cat’s mood before the full onset of winter. The simplest solution is one used by many humans with SAD: spending an increased amount of time in natural daylight. If your kitty has a lounge or bed, put it next to a window or underneath a skylight. If you have a cat-proof window, open it and let her perch awhile on the ledge. If she’s comfortable outdoors, allow her some playtime when the sun is brightest.

Another remedy is an artificial sunlight lamp. These therapy lights use special bulbs that mimic the natural light of the sun and can be bought at any major general retailer or online. Simply keep it turned on in a place where your kitty spends most of her time when she’s awake in order for her retinas to take in all of the light.

Hopefully, following all or some of these suggestions will spare your cherished feline companion an unnecessary case of the kitty cat blues.