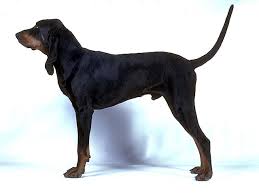 Coonhounds, like other deep-chested breeds, are at the greatest risk for bloat or gastric dilatation volvulus (GDV), which is second only to cancer as the main killer of dogs.

There are many theories as to why GDV happens, but there are still no clearly defined causes for the condition, which can occur in two stages: the first being gastric dilatation and the second being gastric torsion. Dilatation occurs when the stomach suddenly fills with air, placing severe pressure on the diaphragm and surrounding organs. Not every episode of stomach bloating automatically results in gastric torsion or volvulus– a twisting of the stomach. Your coonhound’s stomach can fill up with gas and air and yet remain in position.

In bloat, gas or food stretches the stomach beyond its normal size, pinching off both sides of it, causing your dog excruciating pain and leaving no room for the trapped gas to escape.

The earliest signs of bloat include a hard and swollen abdomen; repeated unsuccessful efforts to belch, retch or vomit; restlessness, pacing, and increasing anxiety. In full GDV, your dog can rapidly go into shock. His gums will be pale, his breathing rapid and shallow, and he can lose consciousness. All within 20 to 60 minutes.

If your dog exhibits any of these symptoms, transport him IMMEDIATELY to your vet or to an emergency animal clinic. Every minute is crucial and none can be wasted. If your dog has been suffering for an hour or more, the damage may be so severe that he CANNOT be saved. Even with timely surgery, up to one-third of all dogs will die.

As soon as your dog is seen, an IV line will be established in an effort to both regulate his blood pressure and administer medications to combat the pain and shock. A vet will then try to release the air in your dog’s stomach — either with an esophageal tube inserted through into his mouth, or with a long, sharp needle inserted into his stomach to relieve the pressure and keep the stomach from rupturing.

X-rays will determine whether your dog’s stomach is simply bloated or if there’s full GDV. If his stomach is indeed twisted, once he’s stable, he’ll require surgery to repair the twist and attach his stomach to the body wall (a procedure called gastroplexy) to prevent a recurrence of the condition. Studies show that, without this procedure, over 50 percent of dogs with bloat will bloat again within three months, while 76 percent will bloat again in their lifetime.

As a preventive measure, many owners of predisposed dog breeds such as coonhounds will opt to have gastroplexy performed when their dog is either spayed or neutered.

Other preventive measures include feeding your dog two or three smaller meals a day, training him not to gulp his food, giving him small amounts of water afterward, and only allowing him to exercise an hour after eating. Providing him with fresh water throughout the day or pre-soaking his kibble can help to prevent bloat as well.

Choose your coonhound’s food very carefully. Most commercial dry dog foods contain carbohydrates like corn, wheat, rice, soy and oatmeal, which are highly fermentable. And because fermentation produces gas, the more carbohydrates your dog consumes, the more gas will be produced.

To slow down your dog’s eating, spread his food out on a cookie sheet or purchase a bowl designed specifically for that purpose. A slower, more even rate of food consumption will help reduce the amount of air your dog swallows and reduce the chance of bloat occurring.

Two other preventive measures? Minimize your dog’s stress level by ensuring he gets enough daily physical exercise, and reduce the amount of chemicals you put INTO and ONTO your dog.

By taking these risk factors into consideration and modifying your coonhound’s diet and lifestyle, you and the dog you love can, hopefully, be spared the nightmare scenario of GDV.