March was a fantastic month for adoptions. Nine dogs found homes and we couldn’t be happier for them, or their new families! 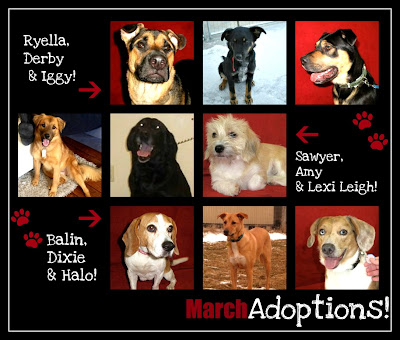 While these cuties are now off the market, there are still many other pets looking for a new home. Check out our website to find out more about them. Your new family member could be waiting for you!

Ryella is a female Rottweiler/Shepherd mix who is between one and two years old. TAGS rescued her from a gassing pound in Montreal and now she is happily settling into life with her new family.


Derby is a young Shepherd cross who was found in a pound. TAGS rescued him just in time and now he has been adopted by the same family who adopted Goofy a few months ago!

Iggy is an energetic Rottweiler/Shepherd mix who loves to play! This guy is approximately one or two years old and his enthusiasm for life easily won over the hearts of his new family members.

Sawyer is a 1-year-old Collie/Shepherd mix who did not have the best start in life, but things have definitely picked up for his cutie. He was part of an unwanted litter left at a pound, but almost as soon as he entered the TAGS adoption program, a new family scooped him up!

Amy is a happy-go-lucky Labrador cross who is about 6 years old. This gal loves belly rubs and being around people. Unfortunately, Amy got lost and ended up at the Sudbury pound, but now she’s settling into a new home thanks to TAGS!

Lexi-Leigh is a Terrier/Shih Tzu mix who loves to snuggle. Lexi-Leigh is nearly a year old and quite shy, but she warms up to people once she gets to know them.

Balin is an 8-year-old purebred Beagle with eyes that can make anyone melt. This calm guy loves walks and spends most of them with his nose to the ground.

Dixie is a beautiful 1.5-year-old Labrador retriever mix. Dixie joined the TAGS program about a year ago when she was rescued from a pound in Kentucky. Dixie can be a bit shy but she loves playing with dogs and cats.

Halo is a 3-year-old Australian Shepherd/Beagle cross who was rescued from an abusive situation. It’s hard to believe someone could mistreat this cute, playful, cuddly guy, but we’re just happy he didn’t let those experiences affect his great personality!
Congratulations, everyone!